How scale forms and what you can do to prevent it 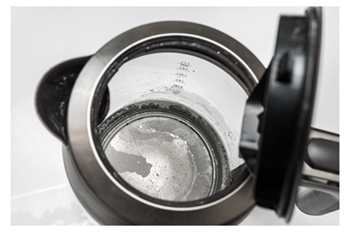 Scale, also referred to as limescale, is the buildup of a white, chalk-like substance that forms where water collects or where water is dispensed. Scale is most often a problem when water is heated or in water-using appliances that heat water. Check your shower head, shower curtain or shower doors, look at your faucets, tubs and sinks, peek inside appliances that use hot water. Although you can’t look inside your water pipes, scale is likely forming there too. No matter if you have city water or well water, your home may be affected by scale.

As water travels through the earth, it picks up minerals. Most water supplies contain calcium and magnesium which are the main contributors of hardness in water. Scale that appears when water evaporates is the visible sign of the calcium and magnesium in the water. Over time, the scale can build up and become unsightly and cause problems in areas using water around your home – especially hot water. In some cases, scale causes significant damage to water-using appliances, fixtures and pipes, resulting in costly repairs and even replacement.

If you have hard water, your home’s water pipes could have significant limescale buildup. As the scale builds up in pipes, it significantly reduces the water’s flow rate.

Many water-using appliances can be damaged by scale as it builds up over time. Scale buildup reduces appliance efficiency, lifespan and performance costing you more in operational expenses, repairs or early replacement. Listed below are common household appliances that are susceptible to damage from scale.

You can often see white spots or a white film on shower doors, sinks, tubs and other heavy water usage areas – especially water that’s heated. Similar to the spots on glassware, these spots are caused by hardness minerals that are left behind when water evaporates. Often a soap scum or film will form around the tub or in the sink or shower when water drains. When hard water combines with soap, it forms a soap curd that clings to surfaces as well as your skin and hair that doesn’t easily rinse away. 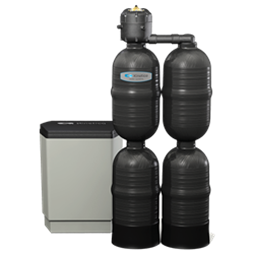 How to eliminate scale from water

If your home is impacted by hard water or scale, you may have tried cleaning solutions specifically designed to remove limescale or hard water stains. Although these cleaning agents will help reduce the visible effects of hard water on surfaces, it will not solve your hard water or scale problem. Plus these cleaners are harsh and expensive. To address hard water and scale buildup, the best approach is to attack the source – hard water. A point-of-entry (POE) water treatment system, like a water softener, can be installed where your water enters your home to keep everything in your home, including your water pipes, free from the damaging effects of hard water.

Water softening is a point-of-entry solution. A water softener is installed where the water enters the home, so hard water doesn’t have the chance to damage anything before the water is softened. Through the process of ion exchange, a water softener reduces the hardness minerals in water, making the water soft. Soft water will significantly reduce or eliminate damage from scale throughout your home. Kinetico offers several water softeners to meet your home's specific needs.

In some cases, specialty filtration is needed or preferred. Water filtration units are often installed where the water enters the home, but they can be installed at a specific point where water is used or before the water is heated. There are also no salt systems, like the Kinetico Scale Reduction System, that reduce scale without softening the water. It’s a saltless option to treat the water in your home, and protect your hot water-using appliances and fixtures.

To determine what water treatment method is best for you and your home, contact your local Kinetico dealer to get a quote or schedule a water test.

Contact Your Local Water Expert to Learn More, Schedule Your Free Water Test or Get a Quote.

Schedule a Free Water Test Get A Quick Quote